Hi and thanks for visiting

I live in Australia’s bush capital, Canberra, with my husband and two terriers – nicknamed Villain and Varmint (the latter replacing poor Critter). I’m also blessed with two wonderful, inspiring daughters—both much easier to parent, toilet train and take for walks…

I released my first romantic suspense novel ARAFURA – Blood, the Wet and Tears in 2012, and ARAFURA – Unfinished Business in 2014; both to 5 star reviews on Amazon. The series, set in Darwin, is about a schoolteacher who must grapple with the impact of PTSD on the man she won’t allow herself to love. He’s a military man with a past, and that past comes back to haunt both of them. The second novel has more action than I expected; accompanied by sex, dynamite, and hilarity – thankfully not always at the same time.

My short story On The Inside was published in the Pure Slush story serial Don’t Kill Me, I’m In Love (2015). Window to the Soul was also chosen in 2015 for submission to the SA Writers Centre Lit Bulb Festival.

In between teaching and trying to follow Leunig’s advice below, I’m writing the third novel in the ARAFURA series. Because words are fun… 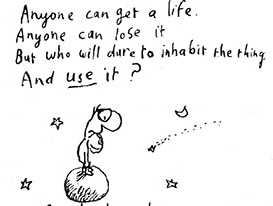 52 Responses to About Me